The MarPAMM project staff took advantage of the July heatwave with some on location documentary film making. The team packed their factor 50 sun screen for trips to Malin Head, Inishowen, Inishtrahull, Murlough, and Blackhead. The footage and interviews with MarPAMM project staff, officers, and stakeholders will result in a series of informative films. We hope that sharing these films widely will raise awareness of the importance of MPAs and the detail of the MarPAMM project. 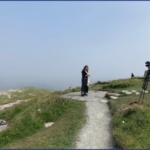 Project staff began by introducing the benefits of MPA and management plans at the most northerly point of the Irish mainland, Malin Head, Co. Donegal and Blackhead Lighthouse in Co. Antrim. This film aims to elaborate the benefits of MPAs and how effective management can assist wider marine communities. A key example of this is the importance of cross border partnerships to create effective MPA guidance, which can aid and enhance conservation efforts on large marine mammals.

Next the team travelled around 10 miles north east to Inishtrahull, Ireland’s most northerly island. It was inhabited until 1929 and has the most northerly lighthouse in Ireland. This island is an important wildlife reserve with a Special Protection Area for seabirds. The film is focuses on some of these protected species that are important to MarPAMM such as Fulmars, Shags and Manx shearwater. The Seabird Officers shared the work of MarPAMM, discussing nesting sites, a bird census, and how collecting data helps long term sustainability, feeding into the wider management plan.

After this, the team visited Murlough and Dundrum, Co.Down. Murlough is a Special Area of Conservation (SAC) with important features such as intertidal sands and muds and the common seal. The film also covers the benefits and importance of joint stakeholder workings, fostering commonality, local ownership and aiding site-specific coastal management. Additionally, this film looks at some of the challenges the stakeholders of the SAC must deal with such as littering and unleashed dogs, as well as the issues like costal erosion. 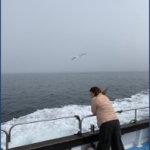 Stakeholders are an important part of MarPAMM, making up one of three designated steering groups. The Murlough Steering Group met on 30th June 2021, where they engaged with coastal processes and erosion presentations by project staff from Ulster University. The Steering Group then discussed what outputs they would like to see from the MarPAMM project as well as the benefits of an MPA management plan. Rich conversations from all stakeholder discussions included topics such as climate change, tourism, diversity, and monitoring. The steering group are looking forward to developing a shared vision that will protect, mitigate, and future proof their local area.